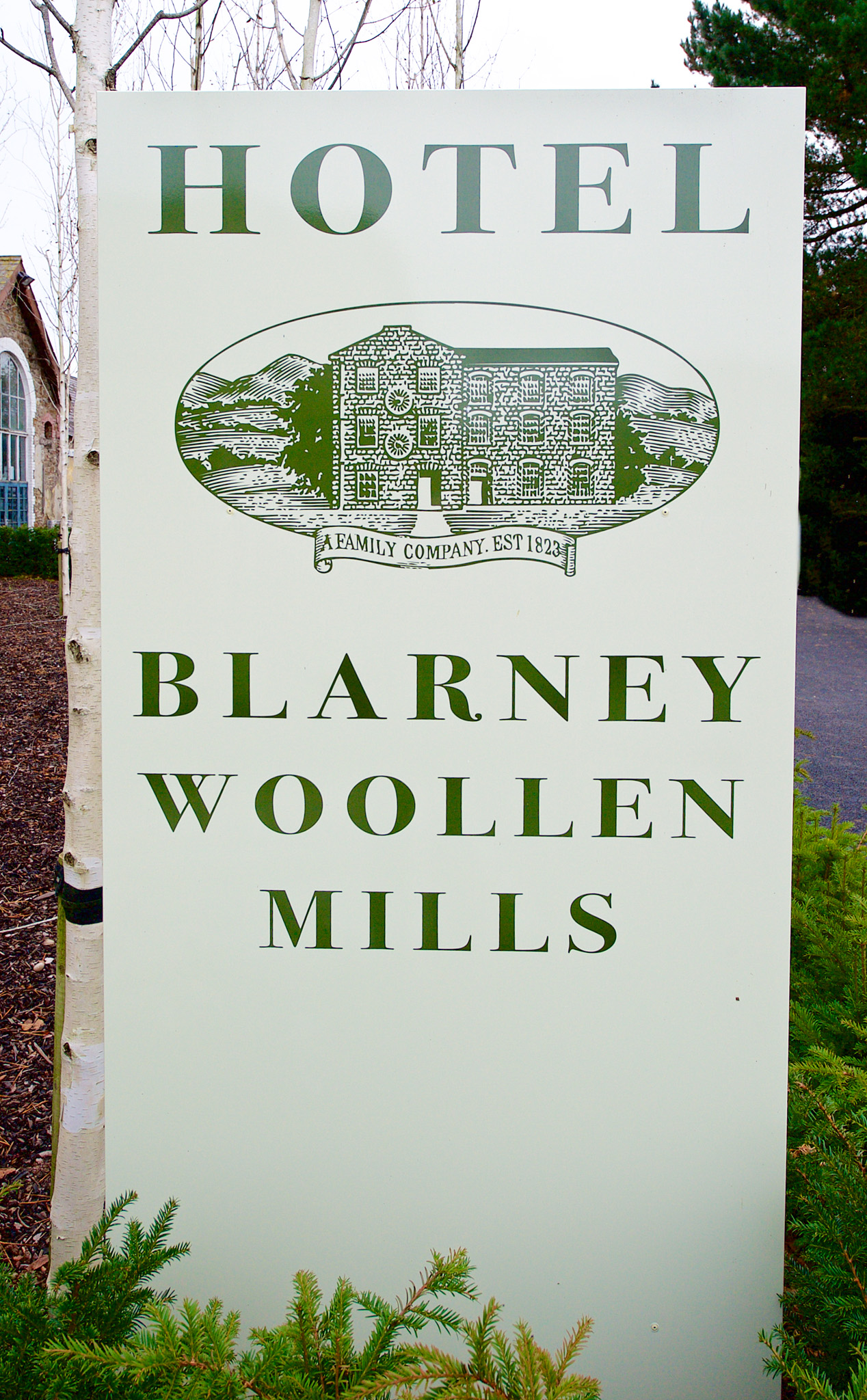 Built in 1823, Blarney Woollen Mills was originally known as Mahony's Mills and provided valuable employment to the people of Blarney and surrounding areas. A water powered mill, it produced tweeds and woollens for the home and export markets.
In 1928, a boy of 13, like most of his friends in Blarney, began to work at Mahony's Mills. His name was Christy Kelleher.
Young Christy began work at the Mill as an apprentice machinist and worked there for 22 years. He became a supervisor with responsibility for the day to day running and maintenance of the heavy industrial machinery.
He was always very proud of the fact that during the war years when machine parts were not available, he improvised so well that 'his' machines never stopped.
In 1951 Christy left to work with an insurance company in the city so that he could better provide for his family. But he was never a man to stand still and always had a little business going on the side. All of his seven children were encouraged to help him run his various ventures. He purchased the local cinema and turned it into a dance hall at weekends. He ran a hackney service and also had a 'vegetable round'.
In 1967 he started a small souvenir shop in Blarney which he and some friends built as he did not have enough money to buy a property (this 'thatched cottage on wheels' is on display in the grounds of Blarney Woollen Mills today).
Meanwhile, business at the Old Mill had started to decline and it finally wound down production and closed it's doors in 1973. The huge stone buildings became bare and empty and the machines were dismantled and removed. Five hundred people lost their jobs. For two years the great mill lay silent and derelict. Nobody wanted it.
Christy visited the site many times and slowly the germ of an idea began to grow - he would buy the buildings he had worked in as a boy and turn the mill into the biggest Irish shop in the world and a magnificent showcase for Irish products.
He 'did a deal' with the auctioneers and placed a deposit on the Mill only to discover that the financial institutions did not share his enthusiasm. His requests for funds were refused. What a dilemma! The family agreed that drastic steps were necessary and between them raised the funds to purchase the Mill and later persuaded the banks to provide the working capital. Christy Kelleher was now the proud owner of the Woollen Mills where he had started his working life. One of the first things he did was to remove the big iron gate that was the management entrance to the Mill. All the factory workers of the Old Mill had previously entered through a side gate, and Christy was determined that everyone would now be able to go through this main entrance.
In 1975, the souvenir business from the thatched cottage was transferred into the Mill and Blarney Woollen Mills as we know it today was born.
The business developed into the largest Irish shop in the world and sells products from every county in Ireland. So whether you are looking for crafts, food, folklore or fashion, it's all there under the rambling roofs of the old Mill. The fact that the business prospered is a testament to Christy's dogged enthusiasm and entrepreneurial spirit. He was always there, with a kind word for everyone, welcoming the visitors, encouraging the staff, and continually looking to improve the visitor experience.
It was from these observations that the Blarney Woollen Mills Hotel was born. Christy couldn't help but notice that the male visitors were getting a bit agitated if the females were spending too long shopping so he decided that what the Mill was missing was a &quot;bar&quot;. He tried to buy a bar license but failed (they were like gold back in 1978) so his only alternative was to open an hotel, which would automatically be entitled to a drinks license. There was still a lot of unused space in the Mill so Christy and his family renovated the space and created a unique environment for this small hotel in the grounds of the Blarney Woollen Mill complex. The bar was aptly named &quot;Christy's&quot; after its founder, and thousands of people enjoy good food, conversation and a bit of &quot;craic&quot; in his bar today.
Christy Kelleher, this great man of vision, died in 1991 aged 76...but with more than half a million visitors passing through the old stone buildings of this historic and glorified mill each year and over 400 people employed in the business, Christy left behind him a thriving family company, which still retains the spirit that made it all happen in the first place.
Special offer

Blarney is one of the most popular tourist destinations in Ireland, promising not to leave any visitor disappointed!
Steeped in history and offering an array of things to do in this charming part of the country.
See more